There doesn't seem to be a dictionary definition of what scarflette actually means but there are many for sale on the web and also lots of patterns.

I have no problem stating that I am a very slow knitter, (although I did once knit an entire jumper that took more than 2 years for it to become a Christmas present). I could knit little things for my son when he was a baby but had to plan ahead many months so he would be the right size when it was finished - note,  not the other way around:) Anyhow, I found this simple to knit version on Elaine's blog here

I also had great difficulty understanding how to knit the button hole in, having never done this before. Having searched the internet, I finally found an explanation here that I could actually understand - though I did have to play it numerous times and sit with it in front of me whilst I attempted it. BE WARNED THOUGH, IT DOES START PLAYING ONCE LOADED!

Here is my first attempt: 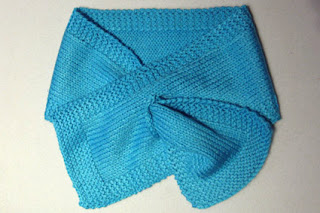 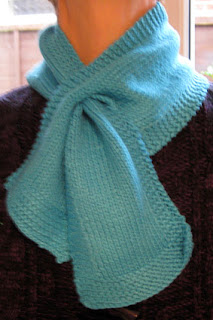 I am currently about halfway through knitting another as a gift but it has now become clear, that I am not going to have enough wool to finish it - darn it. I have had this wool for years so will not be able to buy any more but do have some more in a completely different colour. Problem is, do I pull down the 14" I have already knitted and start again alternating both balls of wool, or, do I insert the new colour now, knit for about 4" then change back to the original colour to finish?