Welcome to Wendymac via Bloglovin.

Another day dawned. Despite it being one of those days when anything that could go wrong, did so, both in and out the kitchen, I carried on!

I had read many different recipes on how to make GF pastry, loads of dire warning etc so was a little apprehensive. In the end, I made up my own recipe:

4oz Gluten Free Plain Flour
1oz of cold butter
1oz cold lard or other white fat or even all butter.
1 medium beaten egg
A good pinch of Xanthan Gum powder (maybe 1/8th a teaspoon)
A little pinch of salt
Fine zest from 1/4 of an orange

Sieve the flour, salt and gum together. Rub in the fats until it resembles breadcrumbs. Add all the zest, stir in, then the egg bit by bit. I needed to use it all but you might not need to. If still just too dry, use a smidge of cold water to bring it all together.

When gathered roughly together, gently form into a flattened ball, wrap in a large piece of cling-film and put in the fridge for 30 minutes.

The pastry was gently rolled out in both directions until the thickness of a £1 coin (1/8th"). Using two different sized biscuit cutters (2.5" and 3"), I cut out 5 large discs and the same amount of the smaller ones.

It had to be re-rolled to achieve this, as well as the 6th large and small circles.  Each time doing so in-between the cling-film.

I greased 6 parts of a tray used for mince pie, jam tarts etc, then used GF flour to dust them. Each large circle was carefully picked up and put inside the tin. Rather than pushing the centre as I would normall do, I kind of cupped the outer edge of the circle to 'entice' it into the tin.

Each was filled with mincemeat (GF), before the tops were added. I used a quick brush of milk to attach them to the bases, then lightly brushed each lid and sprinkled on a little sugar: 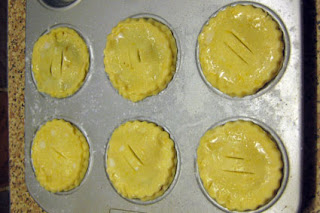 The were baked for 20 minutes, though  I might bake them for 25 minutes next time to see if they would colour a little more. Some recipes ask you to leave them in the tin until cold, though these were stable enough to carefully lift out the tin to cool.: 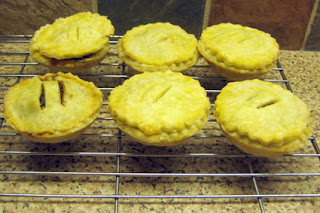 Apart from one sliding off onto the floor (back left), for a first attempt they looked okay.

We tasted the one that fell off (still almost intact) which had a thicker layer of pastry (R), against the final one that used all the scraps and was thinner (L): 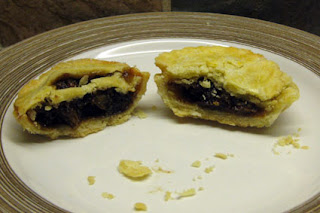 We were both surprised to find they tasted almost like normal ones and overall, were impressed. There was no discernable difference in taste or texture due to pastry thickness. They were a little pale so I will use a little beaten egg on their tops next time.

4 have been frozen for Christmas, some more will be made later, as well as some non GF versions for us.

A small amount of people cannot tolerate Xanthan, Guar or other forms of gum. This site here explains it in more detail and suggests what else to use.