We seem to have settled on making this bread, the recipe for which is under the Gluten Free tab above. As we needed another loaf, I decided to exchange 40g of the brown rice flour for brown teff flour, also adding 1/2 tablespoon psyllium husk, plus 1/4 cup of sunflower and pumpkin seeds.

I am attempting to make a brown seeded bread version of a loaf. Here it is fresh from the oven: 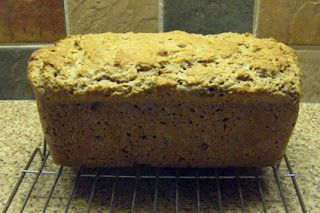 Here it is sliced: 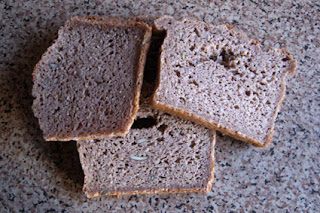 So, how does it taste, what is its texture and does it hold together:

Colour is good, texture is near normal but it does feel slightly damp. That might be because teff doesn't soak up the same amount of liquid as brown rice flour? Could also be the addition of some psyllium husks? Again, I don't know.

We both thought, especially when toasted, that it smelt and tasted like wholemeal bread. Next time around, I'll leave out the psyllium husk and maybe use just a smidge less water and see what happens. I love experimenting.

It has a large air gap about 1/4 of the way down from the top which so far, hasn't affected how it holds together.

I do find though that home made GF bread, so far, seems to not hold together as well after being frozen, again, that might just be me?

For those of you eating shop bought GF bread, they can be very small and often dry. I found this interesting post the other day - here

What I like about it is the honesty, the pro's and cons etc. There are many other comparisons out there but this is for the British market, which is relative to me and mine.

I know not everyone has the time or energy to bake their own bread, especially if you are working full time. However if you can, do try as there are a lot less ingredients in home made versions. Though I do have to say, there are some pretty lousy recipes out there.