DDiL's parents also helped with the move. Their main task was to paint the new rental place which was not left in a fit state of decor or even clean for that matter. They soon had it ship shape!

C. brought a lasagne up for their first night's tea as we were supposed to stay down at the old house for a few nights to enable early morning starts. However, DDiL had cleverly filled every nook and cranny in the moving van and we all felt extra hands would be needed to unload at the other end. Upshot of which was a takeaway.

The beautuful lasagne was had for our final night before we came home. We realised then, it was ages since I had cooked us one. I decided to do a pork and fresh tomato version - got to eat these lovely tomatoes up whilst we can still enjoy them.

Instead of doing a white sauce I omitted that and topped it with a melted milk, tomato and cheese sauce just on the top (quite calorific): 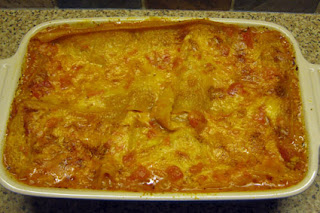 It was very nice. This was a half size lasagne dish, the rest went into foil dishes to be eaten tonight.

We had planned on having some fresh beans with it but once served up, realised this would be more than enough to fill us up.

We got word yesterday that their old house was finalised yesterday so they are now mortgage free for a while. They wanted to rent rather than buy (which they certainly wouldn't be able to afford where they are - footballer's wives and all that rich nonsense bumping up the house prices). Instead they will save like made to increase their next house deposit and take their time looking around, further afield for their next house.

DS's job may well entail quite a few moves in their married life. Next time though, everyone is agreed that a rental firm will be involved:) All they have to do is get rid of some more stuff!
Posted by Dc at 09:19