Welcome to my new follower via Bloglovin - Karan Sheahan.

Of leftover soup - in our case roughly 1.5 ladles of tomato and lentil. Not much for eating you might think, but with the addition of a few more things, it can become a meal for 2 adults. It might well not be the size of meal you are used to eating, but we have gradually brought down our portion sizes in the last few months, so this is fine for us.

We also had 1/2 a packet of streaky bacon left in the fridge. It would be all too easy to throw it all in but most of it is ear-marked for bacon, leek and potato soup tomorrow. I allowed 4 rashers in total, chopped them and added 1/2 a diced onion to a frying pan and fried them in a very small amount of oil. 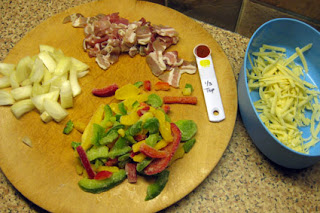 Once they were going brown, a handful of frozen peppers and 1/6th of a teaspoon of smoked paprika were added. Then the soup, followed by a tablespoon of soy sauce and a few dashes of Worcestershire sauce. 6oz of pasta had been boiling whilst this was being cooked and once the pasta was ready and drained, it was added to the soup, stirred and divided between our 2 plates. Salt, pepper and a little grated cheese were put on the top and there you have it, tea for 2. 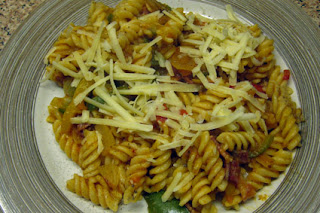 One litre of fresh yoghurt was also made during the day. For supper we were going to have some of that plus diced fresh fruit but instead, had Weetabix!
Posted by Dc at 10:04