On the non GF front, I finally finished the Christmas cake. It is a Dundee version, fed every weekend with whiskey and now, topped off with marzipan. I am not too keen on icing so it hasn't got any: 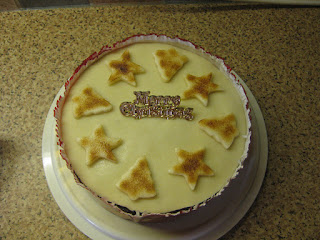 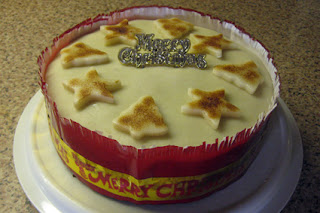 I used a mini kitchen blow torch to brown the marzipan shapes.

The final bread making for Christmas has taken place, one GF Oat bread (recipe under bread on my Gluten Free tab above) and one normal brown loaf. I am hoping the normal one (on the right) is okay as I only wanted to bake one loaf, so the recipe should have been halved.

However, half way through, I forgot I was halving it and added the last 2 dry ingredients in full. Took a while to divide up the mistaken piles and remove half, whether I got half out or not remains to be seen: 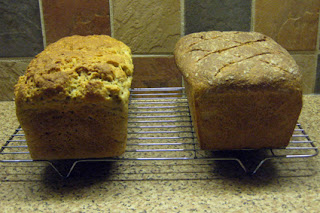 It had risen higher than it looks but as it was in danger of climbing over the edges of the pan, I slashed it several times and it slightly deflated.

Isn't it amazing to see a GF loaf (on the left), the same height as a normal one:)

This will be my last post until after Christmas as my visitors have already arrived. Have a good Christmas everyone.