I used a die to cut out snowflakes and a greeting on one half sheet of kraft card. The process was then repeated on hand painted cardstock. Once all the fiddly bits were removed from both, the coloured version was laid inside the kraft card and stuck into place. You can see this process on the right hand card, which also had a thin line of matching colour placed around the edge before it was stuck onto a whole card: 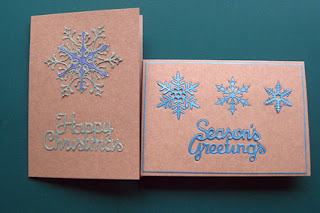 The left hand card was a whole card which had a hand painted die cut snowflake cut out and stuck into place on top of the card. It was way too fiddly and although I used tiny blogs of glue to stick both bits of the snowflake and greeting into place, it would have been better to use a sheet of double sided adhesive to cut out the snowflake and stick it into place.

These next cards were die topped cards, using hand painted, die cut card as toppers. The bell on the left was done as a separate half sheet, gold put around the edge before being placed on a whole card. The blue snowflake was worked on as a whole card: 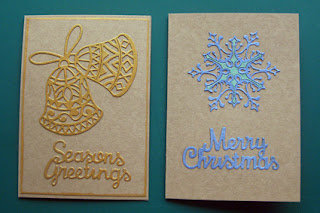 You might be able to make out on the snowflake cards that the center of each one was swapped over and placed inside its counterpart.

For me, I think less is more.

Email ThisBlogThis!Share to TwitterShare to FacebookShare to Pinterest
Labels: Crafting