First of all, welcome to Catriona via Bloglovin, and Donna Ferretti. Glad to have you reading and following, hope you enjoy my witterings!

Yesterday, we went for a quick walk along the beach at Old Hunstanton, to air our minds and bodies. After a bacon buttie at The Beach Cafe, we were home and feeling better for it.

Having read the recipe from Frugal Queen (drop down to 2nd recipe) and the original via A Girl called Jack we decided to give the Kidney Bean, Carrot and Cumin burger recipe a go.

The only thing I wasn't sure about was 1 tsp of Cumin - is that whole or ground? Doesn't matter for the next batch as I have run out. Nor did we have any fresh coriander or parsley so used 1 tablespoon of dried basil and 1 tablespoon dried coriander leaf - we think fresh would be better but you could vaguely taste them.

Also, didn't cook the kidney beans for long enough. They had 10 minutes and we thought them fine, but they were difficult to mash. Left everything to go cold before adding the flour and egg otherwise we didn't think they would meld and be handled very well. Another time, yes there will be at least one more attempt as they are quite nice, we will cook the beans longer or else try them with tinned butter beans, try fresh herbs and experiment with curry paste/chilli sauce/mustard as the thing to mix them rather than an egg. Herewith the picture. 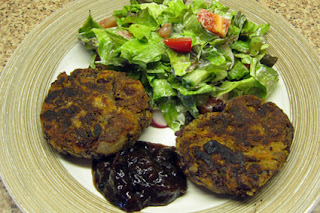 As you can see, we served them with salad and some home made wild plum and date chutney.

Despite it being humid outside, we have both endeavoured to get on with things that need doing here. I potted on some more strawberry babies - need 2 of 2 different varieties, then hopefully, they will all get through winter. If not, I hope to save at least one of each of the 6 different plants.

Some of the Blueberries have been harvested  - 6oz so far off one bush with maybe the same or double the amount yet to be harvested. The fruits on the other bush are still green and tend to fruit after the first one. There is definitely not as many as last year but I have just found out I pruned them incorrectly (to keep them as I want them not because they needed doing). 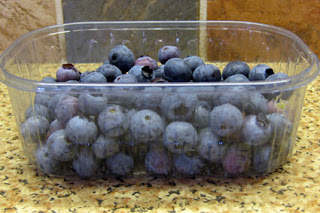 They are not quite as sweet as normal but are already falling when touched and as heavy rain was forecast overnight, (only got a light shower!) we hope the rest will stay put.

On to my 18 month old Blackcurrant bush. I picked 9oz of those with maybe the same amount or slightly more still to come. 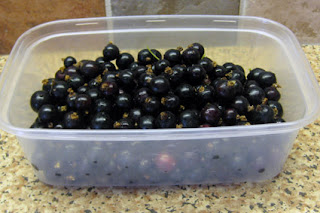 If I get 1 lb, we shall make some jam as it is one of our favourites. If less, I like to top and tail them and stir them into muffins - with no extra sugar. Gives a lovely twang to the flavour!