We left home yesterday to travel to Waddington arriving in the queue at 08:15. We finally parked around 10:05 - not too bad as it happens as we only queued for the last mile or so. The temperature was around 27C, the sky was relatively clear but bright so most of our photographs didn't come out very well.

My all time favourite aircraft is the Lancaster bomber. Again our photograph's didn't come out too well. It did its usually stately display, at times accompanied by the other fantastic planes, the Hurricane and Spitfire.The markings for this year were different to these but I had to go here
on Wikipedia, to find a decent picture

Our second favourite plane, which we support, was the Avro Vulcan. When it takes off, the noise it makes is truly awesome. 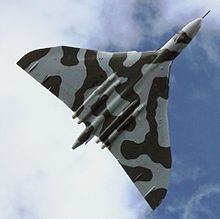 If you have never seen or heard this beautiful aircraft fly, you need to do so soon. Not only does it desperately need funds to fly for next year, it's engines are reaching their deadline and there was talk at the show yesterday, that it's final flight will be 2015. See it's web site here

Finally, the Red Arrows - did get some of our own pictures for these 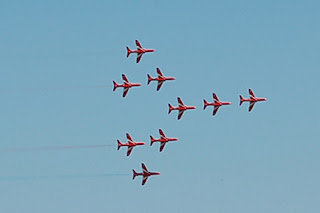 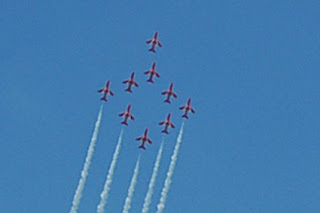 Luckily, the Red Arrows and Vulcan display were around 14:00, and we left after that. We were glad to get home and have a cup of tea. We covered up and wore hats but it was just too hot with all the heat coming off the tarmac.

We probably shan't go again now for a few years. Off to do some early morning gardening before settling down to watch Andy this after.

Andy, I know you won't ever have seen my blog but I, for one, am very proud of you, regardless of whether you win this afternoon or not. I get so fed up of the media putting so much pressure on you. Today, one such headline read "Come on Andy, make us proud".

Such a comment insinuates that we will only be proud of you if you win. To that, I say 'tosh'!