Our doorbell went late evening and DB answered to find our neighbour, R. standing there, with an ice cream tub full of gooseberries! They were put into the fridge overnight and tackled the next day. I washed, top and tailed them and their weight came to 3lb 2oz - very nice.

2lb was weighed out for jam, the rest were cooked in a little sugar and elderflower cordial to have over several nights, with some custard - yum yum!

Anyway, back to the jam. I managed to find around 8 small elderflower heads still viable - not yet changing into berries but it was a close run thing. These were shaken free of bugs and tied in a muslin bag then placed in the bottom of a large bowl. My recipe calls for 8-10 large heads but this was the best I could do.

The 2lb of gooseberries was placed on top, followed by 1 3/4 lb of sugar, 420 ml of cold water and 50ml of elderflower cordial to make up for the lack of flowers. I have reduced the sugar as this gives a slightly more tart jam which we both love.

Everything was then stirred well, covered and left all day (stirring occasionally). Once the sugar had dissolved, it was then left overnight as well. The next morning, the bag of Elderflower's was removed and squeezed into the bowl before everything was put into a preserving pan.

The pot was brought to the boil and cooked until it reached setting point. I use the cold saucer method and a teaspoonful of jam put onto the plate, back into the fridge for 5 minutes to test the set. I don't remove the jam pot from the boil for the first 2 tests. Once I get to testing it for the 3rd and sometimes 4th time, the pot is pulled to one side so it doesn't over boil.

Here it is cooking and going a fabulous pink. 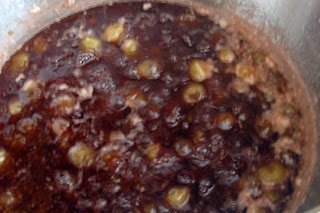 Jars had previously been washed, dried and put cold into my oven, set at 100C to sterilize them. Their lids had also been washed and put into a bowl of boiled water then dried as needed.

Here is the end result, isn't the colour great? Obviously the small one on the top shows the true colour as it has more natural light shining through than the bottom four. 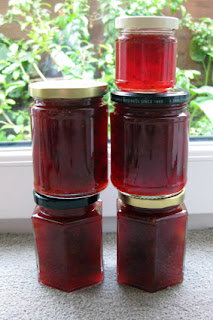 One jar will be given to R. to thank him for his gooseberries.