Welcome to Patricia Sylvia via Bloglovin.

We have finally given up on cold lunches, now that the sunshine seems to have disappeared, and started having soup. First on the menu was this, made up and added to as needed. Here is what I began with: 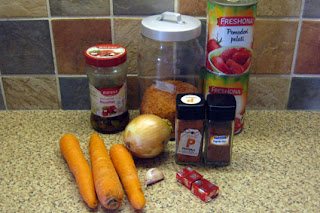 The onion was diced and fried in 2 tablespoons of the oil from the jar of sun dried tomatoes. The finely sliced carrots and garlic clove were added along with the spice which was 1/4 tsp of hot paprika and 1 tsp of mild or normal. Not on the picture but added here was 1 teaspoon whole cumin seeds.

In the jar are about 4 slices of sun dried tomatoes, which were diced and added along with both tins of tomatoes and 1 tin of water. All was brought to the boil, lid on and simmered for 45 minutes. Then 1 cup of the lentils were added, and the soup cooked for a further 25 minutes.

After checking the lentils were done, both stock cubes were added (I used beef but you can use what you like) as well as 1 tablespoon of tomato puree. The whole pan of soup was liquidized using a stick blender before being served up and adding S & P to taste: 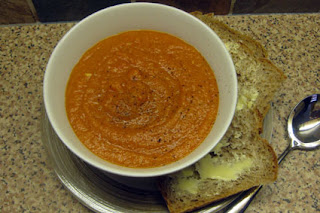 We had enough for another bowlful each the next day. Have a lovely weekend everyone!