First of all, welcome to Jean Scholefield and Catherine at ditzygranquilts via Bloglovin.

This time of the year sees the annual pumpkin harvest. They have been harvesting them close to us for a few weeks now. It is also a huge time of waste with all those lovely pumpkins being carved for Halloween then thrown away. I suspect most people simply thrown the insides of their pumpkins away, such a shame as there are loads of recipes that could use it all up.

On the hunt for something different this year I perused t'internet and came across this recipe and decided to give it a go. The only quarrel I had with her recipe is 'a spring of rosemary'. Now how long is a sprig - that sort of thing drives me mad. I mean, they must know how large a sprig they used, why can't they say so? In the end I used about 3".

Pumpkins seem very cheap this year, the one we bought was just 50p. Buying a pumpkin can sometimes be a bit of a lottery as you never know how much flesh is going to be inside until you cut it open: 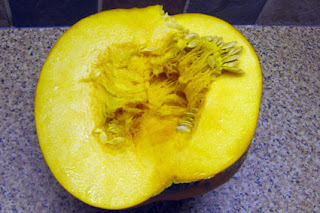 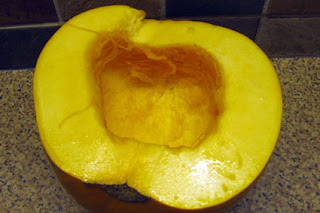 Did well on this occasion. There are also loads of recipes on what to do with the seeds.

Anyway, I decided to roast half of it to be used in the scones and gently boil the rest for another recipe or two.

Once cooked, both were mashed, chavelled further with a stick blender, left to drain, then finely forced through a metal sieve to give me the puree I needed for all the recipes. Lots of washing up:) 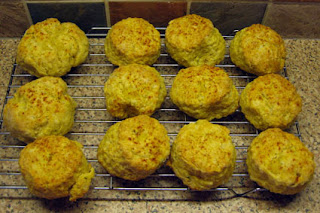 I could have made 13 but didn't have room on my tray hence the two large rustic ones middle and top left! I do not like to waste an egg yolk to coat scones so these had a little milk brushed on top and sprinkled with paparika before baking.

They are very very light and quite difficult to handle when first out of the oven. We had two each with some soup for lunch.

I couldn't find any baking powder in our cupboards so had to use equal amounts of cream of tartar and bicarbonate of soda. Plus by doing so, also omited the 1/2 teaspoon of cream of tartar in her recipe. Enjoying the ones we had with our soup, and as we had run out of potatoes for this week, decided to warm two each for our tea: 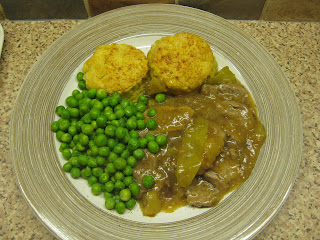 The quick casserole was made from half a pork fillet, two small apples, cooked in cider then thickened. Less than 30 minutes for it all. Now that is the kind of evening meal we like!