Our menu for last week has now been added. Yesterday eventually became windy but warm enough to get a line of washing dried outside. I love days like that, especially in the colder months. Even in the depths of winter, if there is enough of a breeze blowing, washing goes out to be finished off in front of the wood burner.

Having made the scones, we had just about 7oz left of the roast pumpkin puree so that got frozen for making another batch another day. I want to make a pumpkin tart later as well so weighed out 13oz of the boiled puree. Ah, only 13oz there.

Ah well. I'm saying ah, as I also needed 4oz of pumpkin puree to make a pumpkin cake and had actually been soaking the dried fruit overnight for it. Never mind, I found two small quince on my tree, cooked them, put them through a sieve and had just enough.

The recipe is very similar to a Victoria sponge except it has double the flour and one or two extra's!  Weigh out 4oz of mixed dry fruit and steep in tea for 1/2 an hour then drain and leave to go cold.

In a bowl put 8oz self raising flour, 4oz margarine, 4oz sugar, 4oz pumpkin or in this case, quince puree, 2 tablespoons of golden syrup, then crack in 2 eggs plus a good teaspoon of mixed spice. Mix together well. Fold in the drained mixed fruit. You could also add 2oz of chopped nuts if you wish.

Now you have a choice, either put into a greased and base lined 8" deep tin or put into muffin cases. If you choose to make a large cake it will take about 40 - 50 minutes at 180C. If making muffins 25 minutes at 190C. 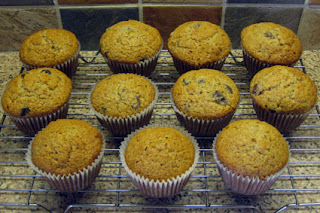