Scrumping isn't what it used to be when we were children.  For a start, we can no longer climb trees!

Coming back from a walk the other day, we noticed a disused orchard full of ready and developing apples and blackberries. Now it is one thing to pick fruit from the countryside, it is entirely another to go scrumping (aka entering property that may or may not still be owned to pick fruit).

Some call it stealing, but as a child, climbing over a garden wall or fence was a dare. Dare you do it and risk being caught! That was the fun of it. We didn't consider it stealing and as a child, we never entered anyone's back garden, only the overgrown gardens of long ago forgotten properties.

This orchard seemed one of those. Although it is near a huge house, we know that the house has a fully productive and well used orchard, so believe this one wasn't in use or indeed owned by anyone.

Anyhow, despite it being quite a warm and muggy morning, we donned long sleeves and trousers, packed bags and containers into a rucksack, along with some secateurs and waterproof coats and off we went. Access into this orchard was via a stream bed, which luckily for us, was relatively dry. The tree we were after was less than 30 feet away but boy, was it surrounded by its own armed forces!

We cut two sturdy branches to make beating sticks and ploughed our way in. Despite being dressed for protection, I am afraid the 6 foot high nettles and 10 foot or so high brambles eventually got the better of us. I had bravely sent DB up front :) and could hear him ouching as he went.

Thick trails of goose grass and biting insects began the second tier of defence. By now we were boiling hot and decided it was not such a good idea after all. See, as children, absolutely nothing would have deterred us!

After half an hour or so (we really needed machete's) we managed to get to some brambles. These were huge, not the normal medium sized ones we generally pick. No, these were the size that are similar to pick your own. They just fell off. Here they are after being rinsed in vinegar water to get the bugs out, on a tray waiting to go in the freezer. 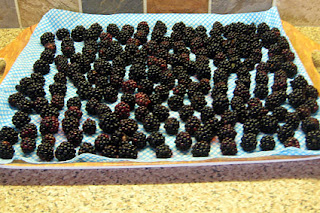 We had managed to pick and freeze 1lb 9oz - so not too bad.

Onto the apples. After several diversions to avoid the forest of bramble plants, we eventually managed to reach the apple tree. One hour in and we were finally there - hooray. Short lived happiness though as they were almost too high. Eventually, with a final determined push (and yelp) from DB, he reached a few. After nearly and hour and a quarter, we had had enough and trod wearily along the paths we had created. We only managed to get a couple of pounds of apples but they taste lovely. No idea what variety they are. 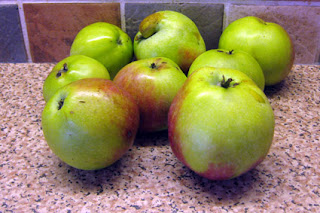 After a bath and scrub down, we had a cup of tea and decided not to bother again. I know where there are wild apples and pears to gather more easily, so we shall do that.

Unfortunately, DB came out in hives that had nothing to do with nettles and spent the rest of the day very uncomfortable. No matter how much you love someone, there comes a point when either they say no or you say it for them. The relief on his face was palpable!

That's another thing about getting older, no matter what your brain tells you, you can still do, invariably you can't. Thank goodness we didn't try to climb any trees is all I can say. Ah well.

Once home we decided to have some of them to eat. Using the weight of 2 eggs as a basis for a small Victoria sandwich cake (weight of 2 eggs, same of S. R. Flour, same of margarine and 2 tablespoons less of some sugar) a sponge was made. Then one of the apples was peeled, cored and grated into the mix. This was put into a lightly greased dish and some frozen brambles pushed into it. 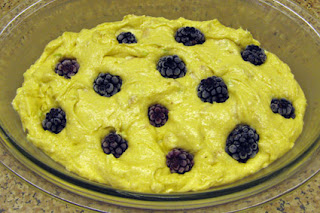 It was then baked until done. I should have cooked it at a slightly lower temperature as it caught around its edges. Still, half between us with some custard was lovely. 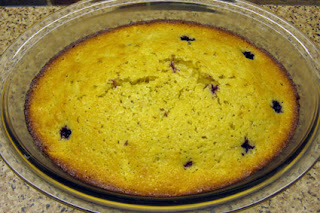 We finished it off another day.

Compared to harvesting in the wild, doing so at home is far less traumatic. Here are a few things
recently harvested from the garden (we don't have a greenhouse as such). 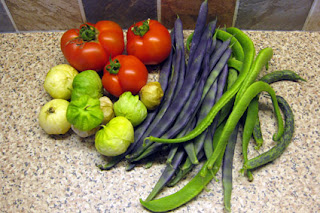 Back left are the first few large tomatoes, Fantasio. Front left are the tomatillo's - the paler ones are those that dropped off by themselves so guess the plant is trying to tell me something - never had that happen before. On the right are 3 different beans. One runner and two climbing French, one of which Cobra, was courtesy of my win from Compostwoman!