Some other bits of garden

This rose, Wedding Anniversary, was given to us by the owners of a rented house we stayed in many years ago - it was our wedding anniversary, so a very nice gift from them. It sends out individual, large roses first, then after they are pruned off, it then sets these nice, but smaller, candelabra flowers. 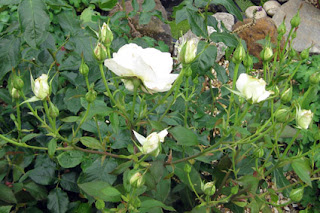 This plant,, which I can't remember the name of, originally used to be just one plant in the front gravel garden. I divided it up last year and brought 3 bits into the back and planted them in front of the fence trained apple trees. Wrong place as it happens so shall move them again later in the year.

Their leaves get munched on terribly (probably ear wigs) but these flowers are highly attractive to the bees, hover-flies and some butterflies. On the second picture, you can see a bee just beginning to take off! 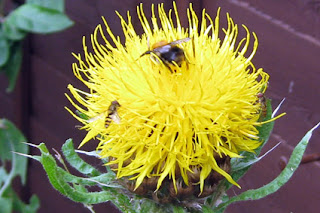 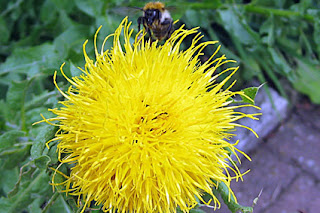 Remember the wormery that was bought this Spring? I tried adding the second compartment of it once the first was full, but the worms didn't move up into it for some reason. We took out the full bit and sieved it carefully 3 times, using smaller and smaller holed sieves, to remove the worms. I would estimate that half of them have either died or escaped. After sieving on the finest setting, we came across oodles of baby worms so that was a bonus and worth the effort. However, the larger ones seemed most put out so were quickly put into a bucket of soil until we had finished.


We filled it back up, to a depth of around 2 inches, with some of the original worm compost, some garden compost, bought in compost, shredded paper and some lettuce leaves. They dived down very quickly into it so hopefully will be alright.


We think a lot of rain had gotten into it as the compost was very wet and the liquid drawer was full. DB chucked it all away before I could tell him not to. My fault, he is not a gardener and I just asked him to drain it and he did! :(

Anyway, after I had sulked for a while and he had wisely gone into the garage, he came up with the beginnings of a roof for winter. It just needs its top and should work a treat. 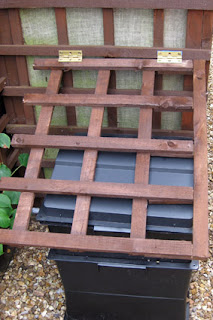 It is attached to one side of a log store (still got to buy some in yet) and is hinged so it can be held up whilst I feed or remove compost etc. Apparently we need to wrap it in bubble wrap for winter (or hessian) to keep the cold out but not all the air. We shall just wrap it up to but not including the side of the top and leave the new top to protect that. It will also have a thick layer of shredded paper inside to give them some more protection.

Within a week, DB has fashioned a lid out of spare bits of an outdoor table, brought back form DS. and FDiL. Here it is, finished and back in place, with a hook to hold the lid up when required. Ah, ain't love grand! 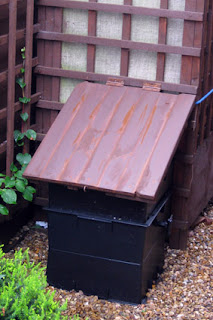