Welcome to Saves Nine via Bloglovin.

A few weeks ago, we purchased a Goose Crown and decided to cook it for lunch on Sunday. Having never cooked one before I looked for a recipe and chose this one.

Here is said crown sitting on the fruit prior to cooking: 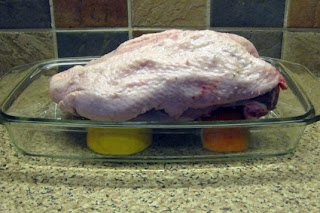 After it came out the oven, ready for a rest: 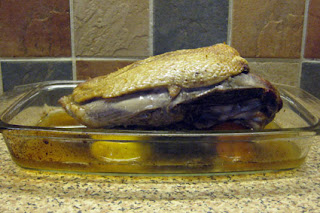 We ate one breast, cut the other one off to make goose bolognaise for Monday tea, then froze the breast carcass to make soup later in the week.

We found the gravy far to lemony for our taste. The goose was okay and tasted like lamb as it happens. We got loads of fat to roast some potatoes later in the week. We both thought goose okay but would have preferred it braised rather than roasted and probably won't bother again.

Anyhow, it cost £7.99 and for that we got two roast dinners, two bolognaise teas and some soup.