Thought it about time I started using this again, although in reality, it could have been in use for a lot of this 'summer' should we have wished!

A thermal cooking bag (how to make one is on my tutorial tab), is similar to a slow cooker but once your food has been started on the cooker top, it is tucked up inside and doesn't use anymore electricity unless you want to reheat the contents.

I fried a diced onion, followed by two lamb leg steaks. Diced carrot, swede and pearl barley were added, along with boiling water. Once the pot had been brought up to a boil, it was cooked for 10 minutes before being transferred into the bag: 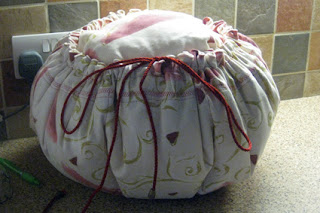 We find it better to use two people for that stage as holding the lid in place whilst the drawstrings are pulled tight is a bit of a fiddle but one person could do it. It was left wrapped up for 5 hours then opened and the contents tested. It was 3/4 done: 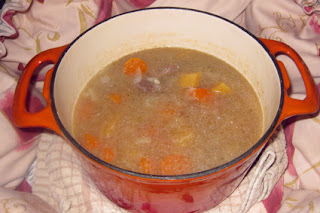 I forgot to add the diced potato at the beginning for some reason, so they were then added, pan back on stove and brought back to the boil for another 10 minutes.

If I hadn't have forgotten them, the saucepan would have been left tucked up for 8 hours before being inspected. By then, it should be done (providing you have cut everything up into small enough chunks) and all it will need is a final heat up to thicken.

Once thickened and a stock cube added, we served up all but 3 ladles of it, along with some home grown runner beans: 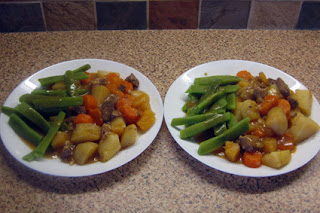 Yes, we could have used it all but I wanted those 3 ladles for another day!