Working on the fruit cage again .....

After an initial very cold start, the sky became blue, the wind dropped to a breeze and the sun came out. By 11am the temperature was 8 Celsius, good enough to get out and carry on with the fruit cage.
All the autumn raspberries have now been transplanted, fed and given additional ericaceous compost. The blueberries have had my soil dug away, fed and more ericaceous compost added. That particular side of the cage was finished off by laying two bags of shredded bark. I'm hoping the compost and bark will help the raspberries and blueberries adapt to my neutral slightly alkaline soil.
The raspberries have been good for around 3 years but last year started to go yellow. The blueberries have now outgrown 4 tubs. They were becoming too expensive to maintain and the tubs were restricting their growth so I'm hoping they won't suffer too much of a shock in my soil. I have also bought some special liquid feed that has seaweed and iron in it.
The left hand side of the cage (as I will enter) has had all spare soil removed ready to be sieved and added to my final raised vegetable bed which has less soil than the others. Tomorrow we will top this part of the cage with shredded bark (might need a little more). Any daffodils that were in that part of the garden have been transplanted to the sides of the cage.
Herewith the photographs of the finished right hand side of the cage (attached to the garage wall). This wall faces due East and gets the sun until around 2pm in summer and 12 midday in winter. 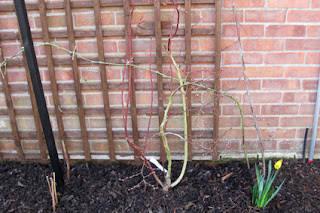 The plant on the right is my loganberry (plus some daffodils). To its left is one blueberry, to the left of that two autumn raspberries. 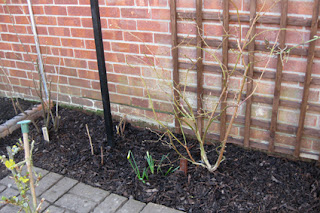 Far left the blackcurrant, to its right two more autumn raspberries, to their right my other blueberry. 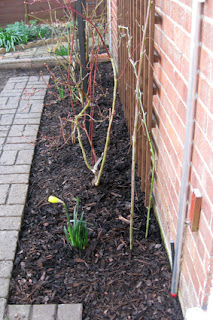 All the bed. We now ache like mad and will shortly be soaking in a late afternoon bath. Tonight is one of our 'school' takeaway Chinese meals round at B's.
Posted by Dc at 15:14