Hoorah! The fruit cage is finished. We have decided to hang some old CD's on the net in places just to warn the birds it is there, although I watched a small finch veer off from it this morning so hopefully, they are aware of it. 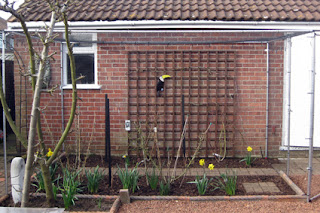 I've added a few more pictures to the In my garden page. Some daffodils and some hyacinth bulbs (front garden section) that were re-planted Christmas presents from a few years ago.

Also took this picture in my front garden: 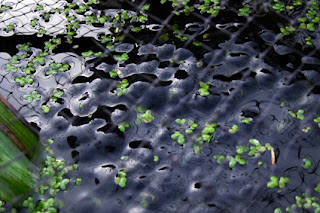 We also have two lots of frog spawn in our sunken dustbin pond. Some different daffodils are growing near the fruit cage: 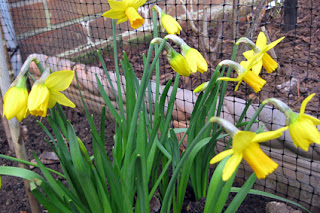 Despite the predicted warmth of today, I had already planned stew for tea so that is what we will have. Some of last years gooseberries have been thawed and will be turned into a crumble (should get 6 portions). I will microwave a suet pudding and divide it between the number of plates of stew I'll serve up. The spares will then be frozen for later use.

It has been so nice to have the windows in the house open to let in fresh air and drive out the stale winter atmosphere. Anyone who knows me, will know I absolutely hate flies in the house. All windows have net curtains and any that are nearly always open, have a special net that fixes across them. This allows them to be open and closed without the need to move the net. Any flies that do get in are chased out or dealt with.

Our DS. knew this from an early age and was often heard saying “Fly, fly” to get our attention. FDiL must have thought we were bonkers hearing this from anyone in the house who heard one, but she has adapted to our crazy routine very well!! They have even gone so far as to put up a door net on their patio door at their own house. Mind you, the number of times their dog S. goes through the slats on it to get outside, often lets more in.

I think the thing I have about flies stems from when we lived in Germany in a 'mosquito' and horsefly infested area. Every night you had to light a special green mosquito coil and let it burn before retiring. Otherwise, the bites were huge and often got infected. Also, I don't want to eat anything that has had a fly vomit on it in an endeavour to soften food enough to suck it up. Don't get me started on how much they poo on uncovered food!!
Posted by Dc at 12:29