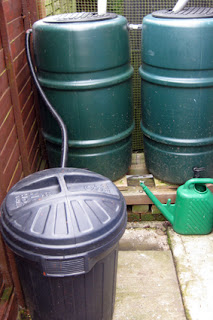 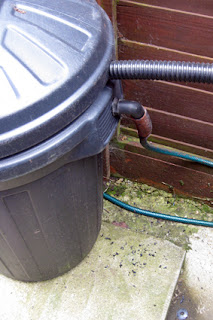 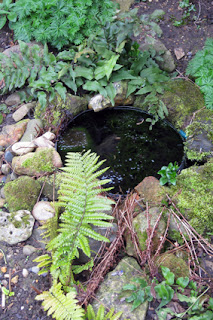 This year is the first time we have got 'laid' frog spawn in it. Previously, I had to scoop some out of the front pond and transfer it.
These are our two compost bins. 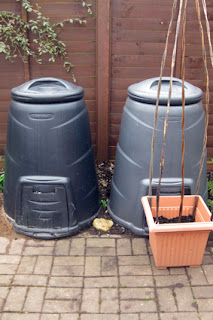 The right one (bleached by the sun as it goes down) was emptied and sieved. We got around 200 litres of beautiful compost. The left one, which was 3/4 full, was transferred into the empty one. It is now closed off (hence the plant pot in front of it) and won't be opened again until Spring next year. We shall now begin to fill the left hand one again.
Finally, like most of you, we have had our fair share of cats going to the toilet in the garden. As they nearly always came over the back fences, we have prevented them coming in by add a 1 foot tall piece of clematis netting along the fences. 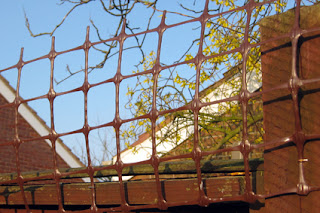 I did see a cat try to walk along it but the pointed tops made it uncomfortable. It doesn't hurt them, just deters them. They can't jump over it as it is too wobbly.
However, the next door neighbour has his daughter staying for a few weeks and she has brought her two cats with her. They have gone in everyone's garden so far and we are all a little fed up. Can't stand accidentally picking it up/treading in it etc. I know one of them is coming in over our front side gate, so have put this up and hope it keeps them out. 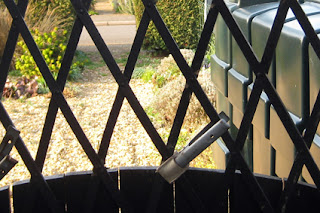 If not, I'll have to think about doing something else. Don't get me wrong, I've nothing against cats at all, but their toilet is another thing altogether.
Posted by Dc at 08:25