We use horticultural grit on top of large pots to try and keep in the moisture. This poses a problem when emptying out said pots at the end of the season. Up until now, we have used a variety of large sieves whose holes catch some, but not all of the grit.

We have looked all over the place for a large sieve with small diameter holes (4-5mm). Other than an 8" wide sieve, designed to put a fine amount of soil/compost on top of seeds, nothing has been found.

We thought about buying some smaller mesh and putting it around existing sieves. DB even went up into the attic after I asked him for an old colander that I knew was up there. This worked but was just too small. We needed something bigger as quite a lot of grit (and gravel previously used) has found its way into our raised beds over the years.

The colander did give us both the same idea though, find something the right size, decide on the size holes required and drill them into it.

Off DB went into his garage and came out with a large, rectangular box. After a few trials, using a 3mm then a 4mm drill, we settled on 5mm. You can see on the bottom, the grid he drew to line up the holes: 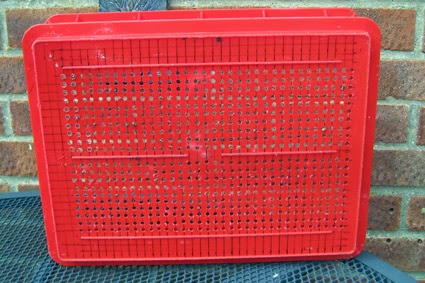 This shot gives you an idea of its depth, around 4": 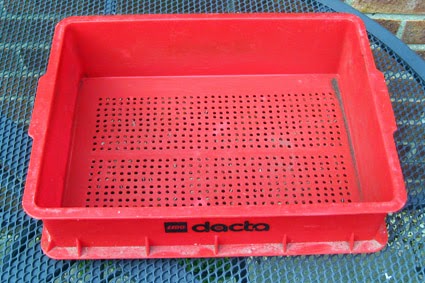 Size wise internally, it is about 1.75 of an A3 sheet. It sieved loads of dry soil very quickly, only letting through about 5% of grit, a great improvement all round. Well done and thank you DB.

Email ThisBlogThis!Share to TwitterShare to FacebookShare to Pinterest
Labels: Make do and mend