I bet that got your attention.

We made some Root Beer bread courtesy of The Iowa Housewife blog, the recipe of which can be found here

The bread was rich and deep in flavour and when toasted was fabulous. However, the root beer itself, the one we used was Boylan Root Beer from Mr. T. was awful, very medicinal and with a strong taste of wintergreen, some of which ended up tasting in the bread.

Not able to find molasses for the first root beer trial, we used one egg cupful of dark brown sugar and 1/4 cup malt extract. We have now found some at Holland & B------ As I said, everything we substituted worked well but the beer could still be tasted slightly, at least the wintergreen part of it.

Not to be outdone, we thought it might work just as well with dandelion and burdock cordial, the very good version made by F-t-m-n  was used. Together with the molasses, it made quite a dark dough. This was it after 1 hour of proving: 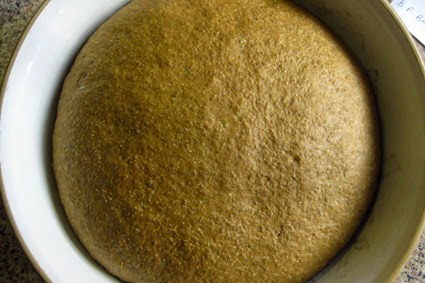 It was divided between two loaf tins - this mixture makes medium rather than large loaves and baked for my usual 34 minutes at 220C rather than the recommended longer time. It does require covering with parchment or greaseproof paper halfway through or it has a tendency to burn. Even with this covering, mine still caught slightly but here they are, fresh from the oven and with a crust (heel) cut too to try: 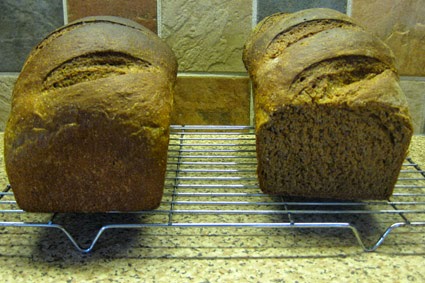 Delicious but a little on the sweet side. Personally we never put sugar in our bread. Another time, we shall try it without the butter and molasses and see how that goes. DB wants us to try ginger beer next!!


Looks wise, it looks a little like gingerbread but is as springy as normal bread. Taste wise, a cross between brown bread and malt loaf.