We had our first frost last night, air rather than ground.

Last year sometime, I bought a single slightly quilted bedspread/coverlet from a charity shop for £7. It was used on the main bed throughout last winter and did make a difference on the really cold nights.

If laid on top of the duvet, it hung over the sides by about 5" and over the foot end by a couple of feet, requiring it to be hitched up and folded over at the top end. This annoyed me so this week, I decided to alter it to create something better.

Measuring it, we realised we could get both a single and a double something out of it and it was duly cut into two.

I have found out I really do not have the patience for proper quilting but do have loads of material and we found a rather colourful sheet that could be sewn onto the shiny side of said coverlet.

The sheet was opened out onto the table, the shiny side of the bedspread laid down onto the back of the sheet, and it was then pinned, tacked and put through the sewing machine. Said machine was not over happy about this and I did snag it a couple of times requiring unpicking and re-sewing.

Herewith some pictures. Here you can see the creamy/yellow shiny side and the start of pinning: 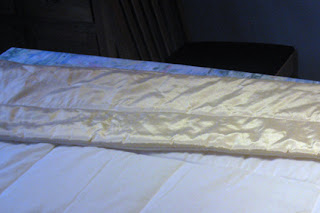 About 18" of sheet has been left on the bottom to tuck it under the mattress at the foot end of the single bed to help keep it in place: 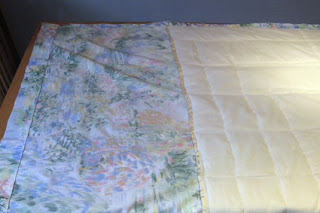 Every 6" it was sewn together to create a slight padded effect and the edges hemmed: 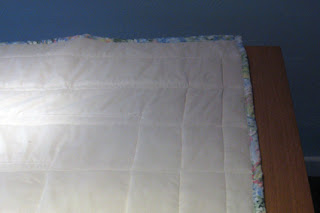 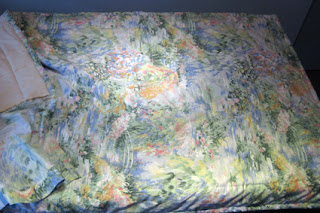 Email ThisBlogThis!Share to TwitterShare to FacebookShare to Pinterest
Labels: Make do and mend