First of all, welcome to Anne Christine Simpson via Bloglovin.

We took ourselves off to the seaside for a couple of hours. We left Ruby at home as it was way too hot for her to be out and about walking.

We had our monthly bag of chips and curry sauce, sitting watching the beach, or rather the sand and sandbanks as the tide was well out in the distance.

There was a bit of a chill wind but for the most part, it was bearable.

Afterwards we took ourselves off to an ice cream parlour. DB has been hankering for a knickerbocker glory for years and they sold them. Here was his: 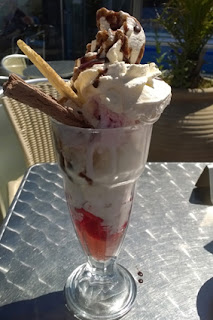 He enjoyed his but said it had too much spray cream and horrible solid marshmallow bits in the bottom. Not a patch on the ones from the 1970's!

Mine should have been an After Eight sundae but they had run out of mint ice cream, it wasn't the same with another flavour: 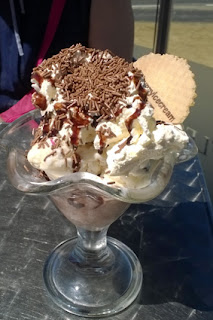 They were expensive to say the least and personally, I don't think worth it. I gave mine 5/10. Too much spray cream and not enough ice cream. Plus the sprinkles on the top tasted awful.

I think we'll stick to our usual ice cream place in future.
Posted by Dc at 10:19