Whilst DB was busy repairing a gap in the back windowsill, with Ruby being the inspector of works, I set to.

What was left of my few pathetic vegetables from bed one, were put into its worm tower. When I lifted the lid to do so, I was surprised to find it turned completely to compost. A quick shuffle around and I put the new stuff in and closed it again. The bed was weeded, dug over and left open to the elements: 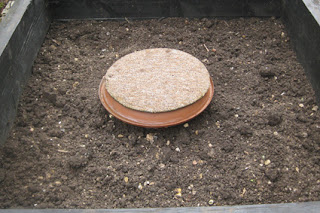 Dwarf runner bean plants in bed 2 were pulled up and disposed of. We tried some for tea last night and they were horribly tough. The parsley was cut down and it too fed into its worm tower. I also weeded and dug over this bed after tying up the French beans, which have finally made an appearance - probably too late but they do have flowers on them now. Also left open to the elements and birds: Bed 3, the new strawberry bed, had all runners and old stalks cut off, weeded, compost added to its worm tower. It too was left open as I need to keep removing their runners in this, their first year, so they can build up roots for a better crop next year: 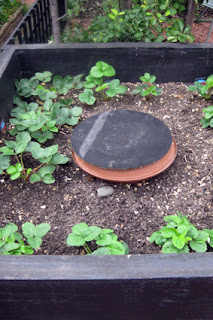 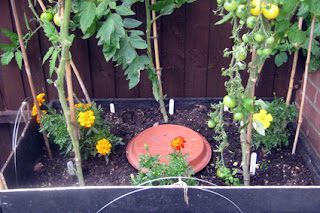 My final job was to remove many apples from the Bramley that have brown rot. I found out what it was on Beechgrove garden this week. Never had it before so that is a bit of a bummer.

Ah well, onwards and upwards. At least I have made a start.
Posted by Dc at 07:34