Welcome to Patricia Wallis via Bloglovin.

On our way to dog training each week, we usually stop off at a supermarket to use their toilets, picking up their weekly recipe paper in the process. DB saw this Chai Tea Bundt Cake and fancied having a go: 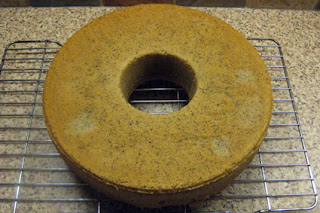 Life had got in the way so in order to speed the process up, I read the method out and he made it, having previously weighed out all the ingredients. We had read it as an all in one cake mix but just as he added the butter, I realised a bit of the method sheet was missing which said to add the butter melted - doh!

Many dirty implements later (I no longer have a hand held electirc whisk), it was as ready as it was going to be. We just could not get rid of all the minute lumps of butter:(

It should have taken 30 - 35 minutes to cook - nope - took nearly 55 minutes. There was quite a lot of butter swimming on the top near the hole (we didn't have a bundt tin either).

After cooling and tipping out the tin, it was done. I was a bit frazzled, can you tell!

Anyhow, it does taste rather nice but we are not sure the chai tea adds anything other than colour as the mix also required 2 teaspoons of mixed spice, which seems to be the main flavour. Its texture is similar to a banana cake. 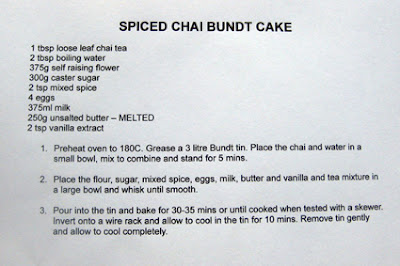