I had planned on buying quite a bit of meat (to us at least) two weeks ago but forgot so did it today. I already have Quorn and 2 very large pork fillets in the freezer. Now I bought beef, pork, chicken and some bockwurst, along with some bacon lardons: 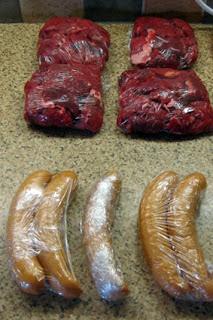 Above 4 stewing steak and the bockwurst. 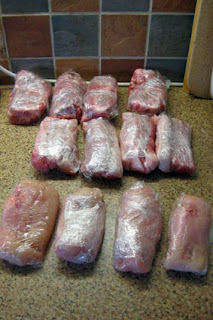 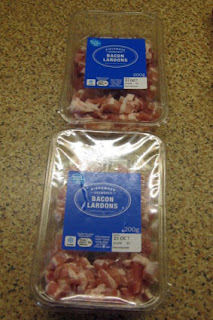 We went to Marks and Spencer today, still no chunky chicken in white sauce, and this time, no chunky steak in gravy. I did buy myself a relatively cheap winter coat though so that was a bonus.

I forgot to tell you that after an almost 2 hours phone call (on hold with inane music), trying to get through to the pension department I succeeded. She was surprised I hadn't heard anything since applying back in April and put me on the emergency pension department computer list. They are legally obliged to sort things out in 48 business hours apparently!

Within a day they had replied, two days later they told me how much I would be receiving (back dated) and what and when future payments would be. I received my backdated pension one week after that. Hence treating myself to a new coat!