If I can adapt a recipe to either suit our needs/purse/cupboard/fridge or freezer contents - I will.
My mother in law made fantastic pastry and mine, at the time, was always hard and chewy. She told me her secret and that was to exchange 1/4 of the amount of P. flour for S.R. flour. Not only can you keep rolling it out but it it always light and melt in the mouth - just how we like ours. If you want to eat one of these without it breaking (after all we will have ours with vegetables and gravy) just use all plain flour.
I made up some pastry using 1 lb in total of such a mixture plus 1/2 lb lard/or vegetable shortening if you prefer. I had only S.R. Wholemeal flour so that was what I used alongside white P. flour!
After rubbing in the fat and bringing it all together with approximately 6 fl oz of cold water, I wrapped it in cling film and rested it in the fridge until I had made the contents.
I had 1 lb of beef skirt, 2 small onions, 2 medium potatoes, a 1” thick piece of swede and 3 medium carrots. I minced the beef and finely chopped the vegetables. A generous addition of salt and black pepper were added by hubby as I continued to mix everything together. 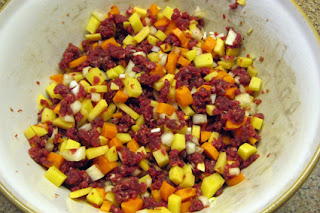 I don't have any saucers or small side plates so used the lid of a 6” pan to cut out my rounds. I also don't glaze with egg as I consider it a waste of an egg (remember, when we were on rations, you were only allowed 1 egg each per fortnight). I either leave it be or use a little milk.
Variations number 1 was to put 1 teaspoon of wholegrain mustard over the base before adding the meat mixture. 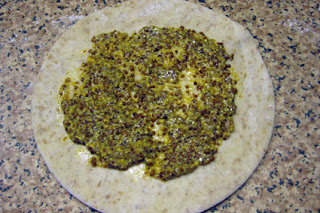 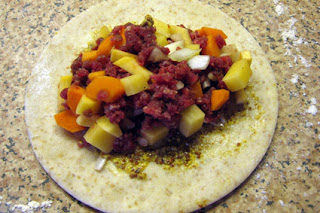 Variation number 2 was to use 1 teaspoon of home made plum and date chutney. 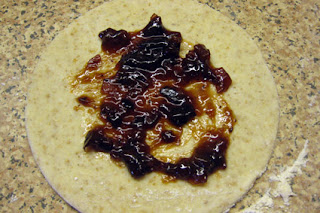 Variation number 3 – not really a variation but you know what I mean - I kept the pastry base free of any additions.
Add in all, I got 2 x mustard, 2 x chutney and 4 x plain pasties out of this flour/vegetable/meat mixture. There was about a cereal bowl full of mixture left which I am going to add to some stew that I shall make later this afternoon. If I'd felt like making some more pastry, I reckon I could have got probably 4 pasties out of the meat/vegetable mixture.
Here are the first four, straight from the oven set at 200C for 45 - 50 minutes. The two on the left are mustard and the next two traditional.
I have also turned into a stew, some braising steak, potatoes and vegetables. With added potatoes and vegetables, I have managed to make us 2 meals each from it, as well as I small tub of spare gravy to go with one lots of the above pasties. 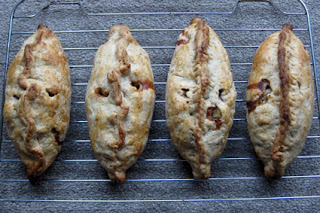