Another cold but sunny day here. A load of washing is on the line but as the current temperature is barely above freezing, don't hold out much hope for it. Nonetheless, the sun is on it, steam is rising from it so should be a little dryer than when it went out! Whilst the sun was out, I went to take a photograph of some things in the garden that are still nice and green. The first is our bay bush. It was transplanted into its tub when it got too high for the plant pot it was in. It is about 3 or 4 years old and was a very small pot plant when purchased. 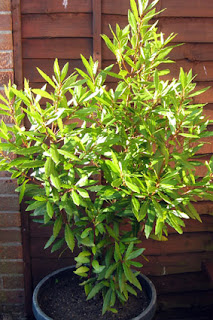 A nice surprise that arrived just under 2 years ago is some mistletoe. According to a gardening book, it is a female but hasn't yet produced berries. I gather it can take 5 years to flower and obviously needs a male in the vicinity. Might have to cut some of it off as it is on a small cordon grown apple tree. I gather they take care not to kill their host plant, even so, it is quite big for such a little tree. 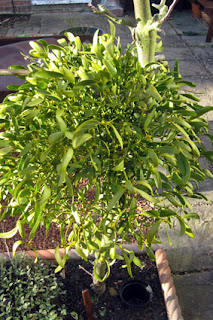 Have made a loaf of multi- seed bread plus a little extra to make a pizza for tea. 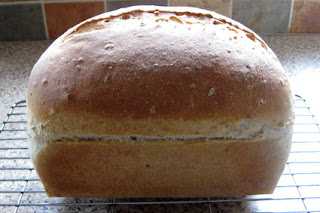 Had some pea and ham soup plus some going stale scones for lunch. Fancied a trifle yesterday so made one (without the cream as we didn't have any). That should do us for 4 desserts.
Also took a walk to our local woods after lunch to gather pine cones. This gathering took less than an hour including walking to and from the woods. Hubby unfortunately twinged his back bending down too frequently so has had some Voltarol cream applied. Hopefully he will be okay for our weekly walk tomorrow.The area covered on the photograph of our haul, is about 2.5' wide x 2.0' deep. 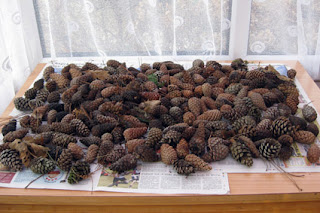 They should dry out quickly and will be used as extra fire lighters, alongside the kindling, for the wood burner. Many people are complaining that their fires are not starting so well. A friend said someone she knows, works for the local paper and they have changed their printing ink – maybe that it the reason, who knows.
Posted by Dc at 14:38