After the first set of curtains debacle....

Well, after waiting just 5 days, our next set of curtains arrived safe and sound. They are way too long at 90" but the next length up 72", is much too short. I could have paid another £40 to have them shortened at source but chose to do it myself. They hang on the carpet by an extra 6": 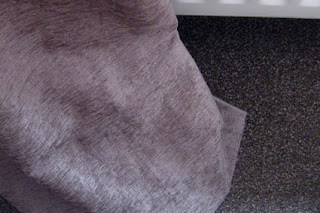 As you can imagine, quite a bit of blue air was fugging the dining room where I was trying to shorten them. DB got a lot of exercise continually climbing up and down a chair to check and double check. Eventually we both understood what needed doing and I set to, with DB checking me when asked!

After a couple of hours, one of the narrower set of curtains 66" wide, had been trimmed, pinned and also had its liner adjusted. Day two, the next one was at the same stage. After lunch, I sewed them both and they were hung back up. They are not in their final positions (i.e. one bit will sit over and cover up the bracket) as they need to be temporarily held in their creases to get them to hang correctly: 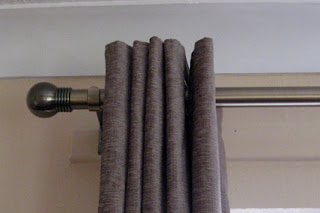 Mid section and bottom section are loosely held in place to form their creases: 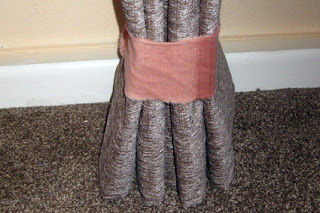 The bottom picture above is the closest match to the actual colour of mink. The bits cut off will not be wasted and can either be made into tiebacks or used on another project.
Posted by Dc at 18:06