A done sort of day!

Saturday and Sunday sort of drifted by in a bit of a haze. OH woke up not feeling 'right' and wringing his hands – something he never does. “Chest pains again?” “Yes, not as bad as last time though”. So we had a quick breakfast, got a snack and drink ready and were on our way to A.& E. within 20 minutes.

You might think stopping to eat and drink before leaving a little strange but we learned just how hungry and thirsty you can get spending hours in A. & E. last July. Anyhow, I used to be a nurse and other than very elevated blood pressure and subsiding pains, everything else was okay.

Have you ever been to A' & E. early on a Saturday morning? No neither have we but it was absolutely empty (other than the ambulance side).

Within a couple of minutes of arriving, we were checked in, E.C.G. was performed and announced fine – thank goodness. Bloods taken, on our way for a chest X-Ray, then given a cup of tea to await results of said blood tests. Machine broke down, did we want another cup of tea – no thanks. 2 hours later all was declared well, no heparin injection this time but he has to go back to G.P. to see about upping or changing his medication for hypertension.

This was a re-run of last July except that time it was early Monday morning and the place was heaving. We arrived around 9:30 am direct from the surgery who thought he might be having a heart attack. E.C.G., blood tests, heparin injection off to M.A.U.

OH didn't leave until nearly midnight – someone had forgotten to check he had had his second blood test. He hadn't so the consultant who had seen him in A. & E. that morning and was just going off duty at 23:00 hrs, was very annoyed as you can imagine. He did the tests himself and 'chivvied' along the lab. Within 1/2 an hour both he and OH were on their way home.

So Sunday (still not feeling right but feeling better than Saturday) plus the weather meant another day of rest for him and baking for me.

Today, the sunshine is out, he feels good and we are busy working slowly in the garden. It has turned into a 'done' sort of day. 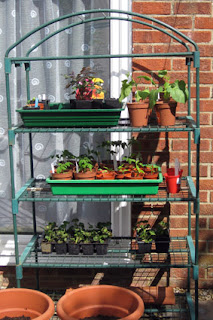 Photograph new plants for garden page – check them out!: done
Pot on tomatoes, beans etc: done
Have a cup of tea in the garden: done
Get some washing hanging on both lines: done
Oh yeah – donate blood (well only me this time as OH wasn't allowed to): done

As you can see, we are having a 'done' kind of day. Now we're going to sit down and rest. That's the best thing after donating blood, a cup of tea, club biscuits and resting for the rest of the day!
Posted by Dc at 16:34